Dr. Dondershine in testimony in Sgt. Lawkowski’s suit against the   United States Dept. of Veterans’ Affairs

Every day it’s fitting to recognize those individuals who made the ultimate sacrifice for us and those who continue to pay the price. Sometimes it’s military Veterans suffering from Post Traumatic Stress Disorder (PTSD) who continue to pay the price. It is for these Veterans and others like them that the Federal Tort Claims Act (FTCA) plays an important role in holding the United States' responsible for Veterans' medical care and enables them to sue when the medical care they are provided does not meet the standard they deserve.

Typically, the doctrine of sovereign immunity protects the United States and other governments from suit. The enactment of the FTCA in 1946 by Congress waived this immunity for situations where negligent or wrongful acts or omissions of government employees, acting in the scope of their employment, cause injury to others. 1 The legislation allowed for suits by American citizens for the first time ever.

The FTCA provides: “The United States shall be liable, respecting the provisions of this title relating to tort claims, in the same manner and to the same extent as a private individual under like circumstances, but shall not be liable for interest prior to judgment or for punitive damages.” 2 The United States District Courts has jurisdiction over FTCA claims and creates a federal cause of action against the United States but applies the state lawwhere either the act or omission occurred.

A tort claim is a rather simple legal action: there must be a duty, that was breached, and the breach was the cause of the injury or damage. In Pennsylvania to prove a medical negligence claim, a person must establish: (1) a duty owed by physician to patient; (2) a breach of that duty from physician to patient; (3) that breach of duty was proximate cause of, or substantial factor in, bringing about harm suffered by patient; and (4) the damages suffered by the patient were a direct result of that harm. Laskowski v. U.S. Dep't of Veterans Affairs, 918 F. Supp. 2d 301 (M.D. Pa. 2013)

So when Marine Sgt. Stanley Laskowski sought treatment for PTSD in 2007, the court found the VA gave him less than stellar treatment. In fact, the negligent care provided to him by the medical professionals at the VA who had a duty to care for him, allowed Mr. Laskowski to snowball from a challenged mental state into such an addictive destructive state that he ended up committing a criminal act. His arrest for breaking into a drug store eventually led to Sgt. Laskowski getting treatment for the PTSD that he so desperately needed -- but only because the County Prosecutor intervened on his behalf. Unfortunately, the delay getting treatment to him rendered Sgt. Laskowski unemployable and caused significant harm to him and his family.

What is a tort claim?

A tort claim is rather simple: there must be a duty, that was breached, and the breach was the cause of the injury or damage. In Pennsylvania to prove a medical negligence claim, a person must establish: (1) duty owed by physician to patient; (2) breach of duty from physician to patient; (3) that breach of duty was proximate cause of, or substantial factor in, bringing about harm suffered by patient; and (4) damages suffered by patient that were direct result of that harm. Laskowski v. U.S. Dep't of Veterans Affairs, 918 F. Supp. 2d 301 (M.D. Pa. 2013)

On March 17, 2010, Sgt. Laskowski sued the United States, using the FTCA, for the negligent medical care he received from the Veterans Affairs hospital for treatment of his PTSD. In his lawsuit, Sgt. Laskowski contended that several standards of care were breached including:

1) That the standard of care for the treatment of PTSD requires psychotherapy.

2) That the standard of care for the treatment of PTSD requires the application of the VA/Department of Defense Clinical Guidelines for the Management of Post–Traumatic Stress (hereinafter the “Guidelines”), informed by the sound clinical judgment, supervision and clinical experience.

3) That the relevant standard of care for the treatment of PTSD requires “a nexus between the symptoms, the diagnosis, and the selected medications.

4) That the applicable standard of care for the treatment of PTSD requires the coordination of care through communication and the creation of an interdisciplinary treatment team.

5.) That the relevant standard of care for the treatment of PTSD requires that physician extenders “must practice under the supervision of a physician who is responsible to be aware of the case, to provide education and to intervene, if necessary, for the welfare of the patient.”

The Court agreed with him that the Veterans Affairs had a duty to provide Sgt. Laskowski with a certain standard of medical care and that they breached the standard of care in several ways. “Here, not only did the VA not provide proper PTSD treatment, but they administered a medication that would result in self-medication with an addictive substance.” Laskowski v. U.S. Dep't of Veterans Affairs, 918 F. Supp. 2d 301, 325 (M.D. Pa. 2013)

This case shows what a FTCA needs to prove

While this case is indicative of what a person has to show to prevail in a FTCA case, the Court held: “The court finds, as will be explained below, that a preponderance of the evidence presented at trial establishes that the WBVAMC committed medical malpractice with respect to the care that it provided to Mr. Laskowski and that its medical malpractice caused his foreseeable injuries. Accordingly, the court will grant a verdict for the plaintiffs, and, in so doing, we note that this holding is unique to the facts presented before the court. We do not intend this decision to be a sweeping criticism of the defendant's treatment of veterans with PTSD. Rather, this case is very fact specific and we can make no comment on the defendant's treatment of any other patients. Laskowski v. U.S. Dep't of Veterans Affairs, 918 F. Supp. 2d 301, 305–06 (M.D. Pa. 2013)

US District Court of Pennsylvania findings

“We award the plaintiffs the following damages:

Stanley P. Laskowski, III's Past Non-Economic Damages in a lump sum, including pain and suffering, embarrassment and humiliation and loss of the ability to enjoy the pleasures of life: $500,000.00

Stanley P. Laskowski, III's Future Non-Economic Damages in a lump sum, including pain and suffering, embarrassment and humiliation and loss of the ability to enjoy the pleasures of life: $700,000.00 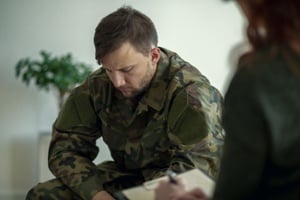 PTSD Diagnosis can be complicated
by Kimberly Craven 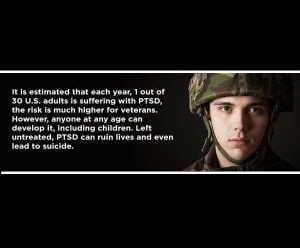